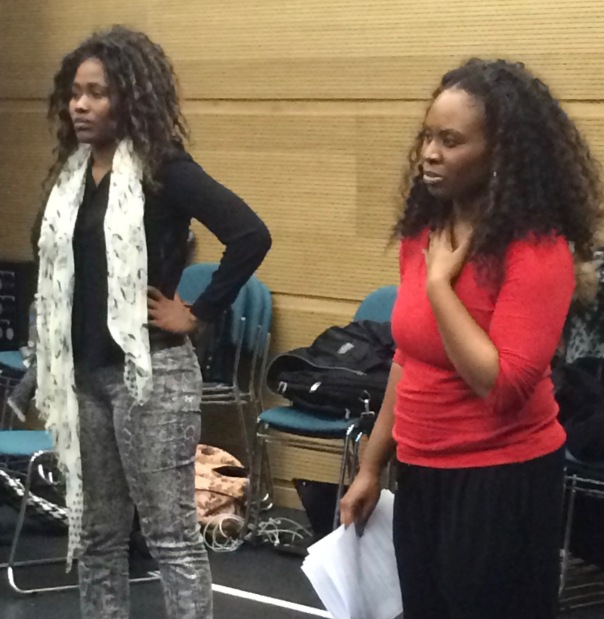 We started with a warm up execise led by liselle and and then went through our group readings. The session was run by Rebecca Hemmings from Birmingham she runs an organisation called strawberry words. She facilitates Black History through Drama in Education. This involved themes and participatory drama strategies.

Rebecca uesd a african story of Anansi, a ½ man ½ spider who migrated from Ghana to Jamaica. He was a trickster and everyone was wary of him. One day, he saw some ripe mangoes across the river. He couldn’t swim so begged the birds to donate their feathers. The birds knew he wasn’t upto no good but gave him the their feathers anyway. Anansi tried on several occasions to fly but failed to the amusement of the birds. He eventually flies but eats all the fruits on the fruit tree. While asleep, the birds took their feathers and upon waking up anansi tricked the crocodile to take him back to shore before feasting on his eggs. Making it the reason crocodile swishes his tail searching for Anansi

As she told the story she got us involved and embodying the characters by encouraging saying the words and doing the actions in the story. This manner of delivery would help the kids to: The kids will embody it more They will own it The story included a lot of animations and children can participate and learn from it especially if English is not their first language Helped enhance their listening and speaking skills Build confidence

In the late sixteenth and early seventeenth centuries, states on the Central African coast found their economic power and territorial control threatened by Portuguese attempts to establish a colony at Luanda (in present-day Angola). Many of these states had become regional powers through trade in African slaves. It was the growing demand for this human labor in New World colonies such as Brazil that ultimately led Portugal to seek military and economic control of this region. One leader who proved to be adept at overcoming these difficulties was the queen of Ndongo, Ana Nzinga.

In 1624, Ana Nzinga inherited rule of Ndongo, a state to the east of Luanda populated primarily by Mbundu peoples. At that moment, the kingdom was under attack from both Portuguese as well as neighboring African aggressors. Nzinga realized that, to remain viable, Ndongo had to reposition itself as an intermediary rather than a supply zone in the slave trade. To achieve this, she allied Ndongo with Portugal, simultaneously acquiring a partner in its fight against its African enemies and ending Portuguese slave raiding in the kingdom. Ana Nzinga’s baptism, with the Portuguese colonial governor serving as godfather, sealed this relationship. By 1626, however, Portugal had betrayed Ndongo, and Nzinga was forced to flee with her people further west, where they founded a new state at Matamba, well beyond the reach of the Portuguese. To bolster Matamba’s martial power, Nzinga offered sanctuary to runaway slaves and Portuguese-trained African soldiers and adopted a form of military organization known as kilombo, in which youths renounced family ties and were raised communally in militias. She also fomented rebellion within Ndongo itself, which was now governed indirectly by the Portuguese through a puppet ruler. Nzinga found an ally in the Netherlands, which seized Luanda for its own mercantile purposes in 1641. Their combined forces were insufficient to drive the Portuguese out of Angola, however, and after Luanda was reclaimed by the Portuguese, Nzinga was again forced to retreat to Matamba. From this point on, Nzinga focused on developing Matamba as a trading power by capitalizing on its position as the gateway to the Central African interior. By the time of her death in 1661, Matamba was a formidable commercial state that dealt with the Portuguese colony on an equal footing. Nzinga, who reconverted to Christianity before her death at the age of eighty-one,

She asked to use the story create various drama strategies that included still images, games, sound and improvisation. I cried any imaginary image of queen Nzinga’s secrete life which reflect the soft side of her

In the afternoon, we went to stratford royal theatre to try and hear talks about possibilities of internships at the theatre it was great because it give us the opportunity to explore and get some experience in the market industry.

This is a theatre that works with young people and communities in Hackney and East London to ensure access for all to arts activities that break down barriers and engage people in debate. The theatre’s vision is for a society where questioning, articulate and motivated people create and collaborate to build thriving communities

The mission of immediate theatre is to engage young people especially those at risk of marginalisation or exclusion in high quality artistic projects which involve creative and personal development, training and employment that equip them with the skills of inquiry, collaboration and communication needed today to shape the thriving communities of tomorrow.

The company aims are:

To support the involvement of young people in decision making and to develop future community leadersFrom the outset their vision was to work closely with locally based organisations and community groups to create theatre which engaged people in the process of change. The combination of participatory projects and professional productions was designed to bring local theatre practitioners together with the community to create inspiring work with high artistic standards for specific audiences. The term “immediate” implying “right here” on your doorstep and the “right now” of being responsive to current issues affecting local people.Immediate Theatre not only gives people a stage on which to perform, but also the confidence to stand on that stage and have their voice heard. Nurturing this new found confidence is important to Immediate Theatre. Therefore, they create supported pathways across our projects so participation are not just an isolated experience but an ongoing journey.